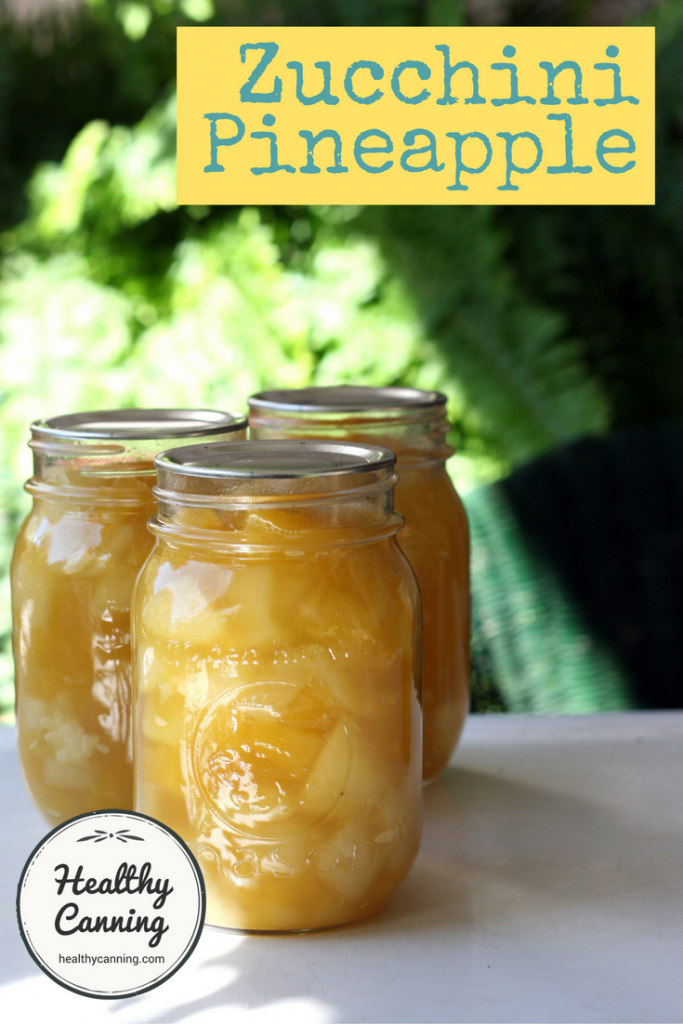 This Pineapple-Zucchini recipe is so crazy that we couldn’t not add it to our repertoire.

Use it in salads, desserts, or other recipes calling for crushed or chunk pineapple.

This is one of the kookier recipes in the canning world, and it’s actually for real, USDA approved and everything.

It dates from the early 1980s, riding the wave of zucchini (aka courgette) enthusiasm that had swept North America in the 1970s. As part of this wave, zucchini bread recipes were born, and people started joking about breaking into neighbour’s cars and leaving them zucchini. This recipe is another product of that era.

You may also see it called “Mock Pineapple” or “Faux Pineapple.”

Some of the earliest versions didn’t include the water-bath processing, but disregard those and use a current version which gives tested processing times.

Proponents of the recipe touted cost savings versus the real thing, but we’re not sure if that is necessarily true anymore.

This makes a lot, so you may wish to cut the recipe in half unless you have a lot of zucchini you need to do something with.

If you wish to make this sugar-free, you may (see Recipe notes.)

(To be clear, most people prefer this used IN something, rather than eaten on its own out of the jar.) How to water bath process.

How to steam can.

When water-bath canning or steam canning, you must adjust the processing time for your altitude.

For stevia, Better Stevia liquid stevia was the stevia used.

In a 1980 article from Colorado, Extension agent Pat Kendall says the Zucchini Pineapple recipe originated at Utah State. (Disregard versions of the recipe she provides: use only current ones. Note as well that her processing times would have been for Colorado’s altitude.) A November 1981 article (see further below), says the recipe emerged in Utah at stores and road-side vegetable stands, which would sell tins of pineapple juice alongside zucchini to promote the idea.

Note in the articles below that any early versions of the recipe are cited for historical research purposes only, and the current one at the top of this page is the one to follow instead.

Please note as well that any anticipated cost savings cited in various articles below may no longer be true, as pineapple has come down in price a great deal since the recipe originated. 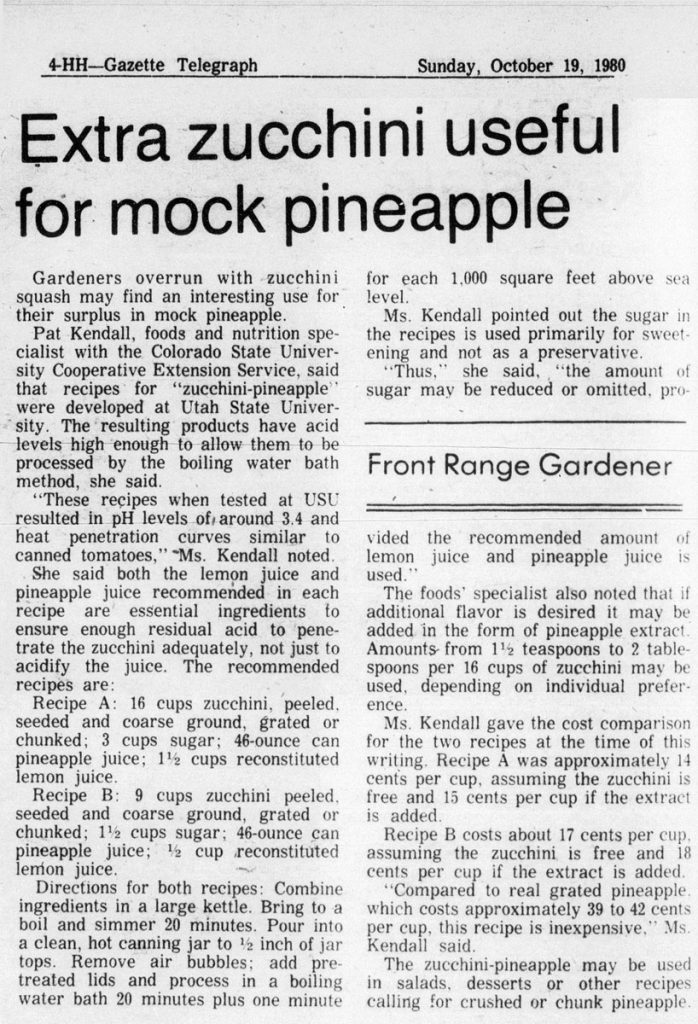 Gerald Kuhn at Penn State, the person who developed the first USDA Complete Guide, endorsed the recipe in September 1981 with the added provision that the jars had to be processed. (Clearly, a rogue version that dropped the processing must have surfaced.)

Notice that his ingredient proportions are different again from the two mentioned in the article above from a year earlier, so clearly standardization of the recipe hadn’t happened yet, and probably didn’t until its being taken firmly into the “canon” with its inclusion in the 1988 USDA Complete Guide. (Again, use only the current version, as we have above on this page.) 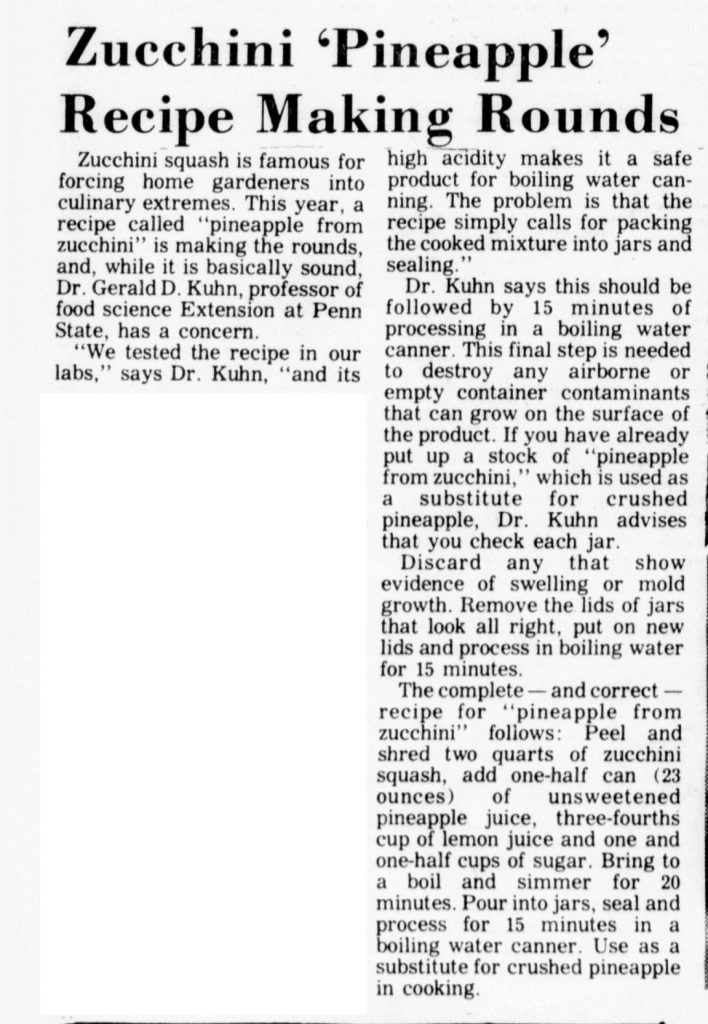 A few months later, in November 1981, he must have been bemused to find himself having to defend the recipe after some controversy developed. Some newspapers were reporting that it was dangerous to store the recipe:

Pineapple-zucchini recipe may be dangerous if stored: If you tried a recipe that turned summer’s abundant zucchini squash into a substitute for crushed pineapple, you may be concerned about reports in the news media that the product is “potentially dangerous when stored.”

Dr. Gerald Kuhn, professor of food science extension at Penn State, notes that the safety of the product depends on the recipe you used and how long you processed it in boiling water. “At least four different versions of the recipe were making the rounds this summer,” he says. In fact, “pineapple from zucchini” first surfaced in Utah and quickly made its way East.

Dr. Kuhn’s researchers tested one recipe – they thought the only one – in late summer and found that its high acidity made it a safe product for boiling-water canning, the recipe originally called for packing the cooked mixture in jars and sealing it. Based on those laboratory tests, Dr. Kuhn recommended to consumers that this be followed by a full 15 minutes of processing in the boiling-water canner. This final step is needed to destroy any airborne or empty container contaminants that can grow on surface of the product. A few weeks ago, the ‘potentially hazardous when stored’ reports reached Dr. Kuhn.

“We were puzzled,” he says. But some detective work and several conversations with food scientists in other states and at the U.S. Department of Agriculture soon cleared up the mystery. The different lab results were caused by substantially different recipes. “The Michigan recipe on which those reports were based is a low acid product,” says Dr. Kuhn. “It calls for only one-half cup of lemon juice for 17 cups of zucchini, compared to the three-fourths cup lemon juice to eight cups of zucchini in the recipe we had originally tested. In essence, the Michigan recipe uses only one-third as much acid. ’ He stresses that only high-acid foods are suitable for boiling-water canning.

The low-acid problem was made even worse by directions to cook the mixture three minutes and process in the canner only 10 minutes, he adds. He had recommended a 20- minute cooking and a 15-minute processing – and that was with the high-acid recipe,” Dr. Kuhn says. “Consumers should discard any “pineapple from zucchini” product that was made with anything less than three and three-quarters cups of lemon and pineapple juice per half gallon of zucchini.” If you used a recipe that did have the proper proportions of lemon and pineapple juice but did not process the product in boiling water for 15 minutes, Dr. Kuhn advises you to check each Jar. Throw away those that show any evidence of swelling or mold growth. Remove the lids of jars that look all right, put on new lids and process in boiling water for 15 minutes.

‘Evidently,’ says Dr. Kuhn, ‘the pineapple-zucchini recipes first appeared through store promotions. They became so widespread that roadside vegetable stands were stacking jars of pineapple juice alongside bushel baskets of zucchini. There’s no doubt that consumers are always on the lookout for ways to use zucchini, and this does make an acceptable substitute for crushed pineapple. ‘It is also a pretty good pineapple-flavored marmalade. We are convinced that the first recipe, with our modifications, is a safe product and can be prepared and enjoyed with confidence.

The complete – and correct – recipe for ‘pineapple from zucchini’ is: Peel and shred two quarts of zucchini squash, add one-half can (23 ounces) of unsweetened pineapple juice, three-fourths cup of lemon juice and one and one-half cups of sugar. Bring to a boil and simmer for 20 minutes. Pour into jars, seal and process for 15 minutes in a boiling-water canner. Use as a substitute for crushed pineapple in cooking.” [4]Pineapple-zucchini recipe may be dangerous if stored. Franklin News-Herald. Franklin, Pennsylvania. 28 November 1981. Page 6. Col. 4. 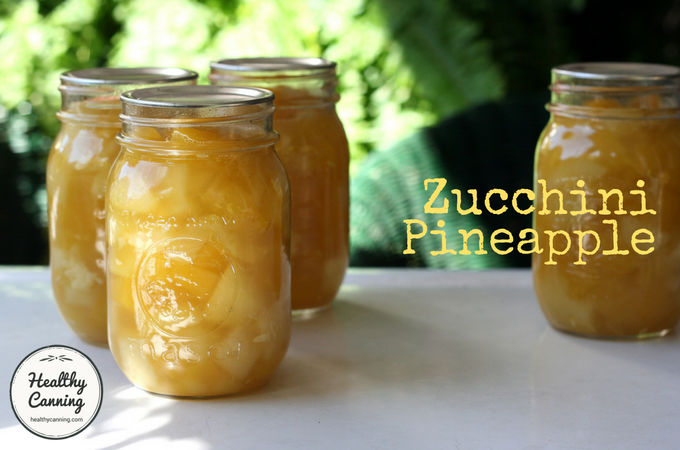 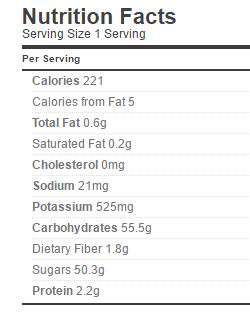 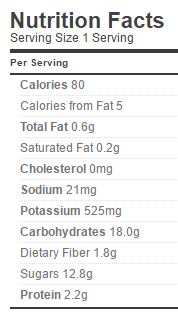 Is the homemade version with zucchini healthier? If you make the full-sugar version, it might not be. CalorieCount (shown below) says that a cup of the real pineapple, in heavy sugar syrup is 210 calories — compared to the USDA zucchini version which has 240 calories. 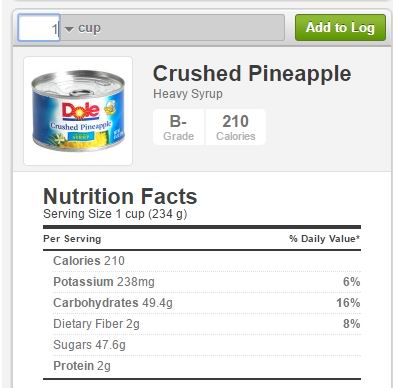 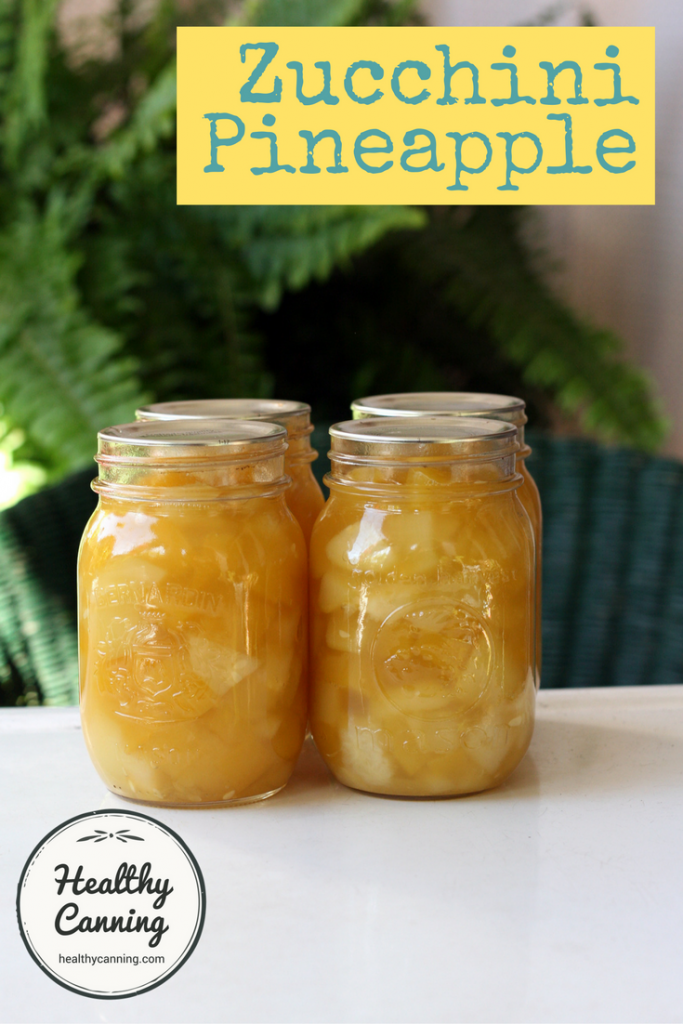