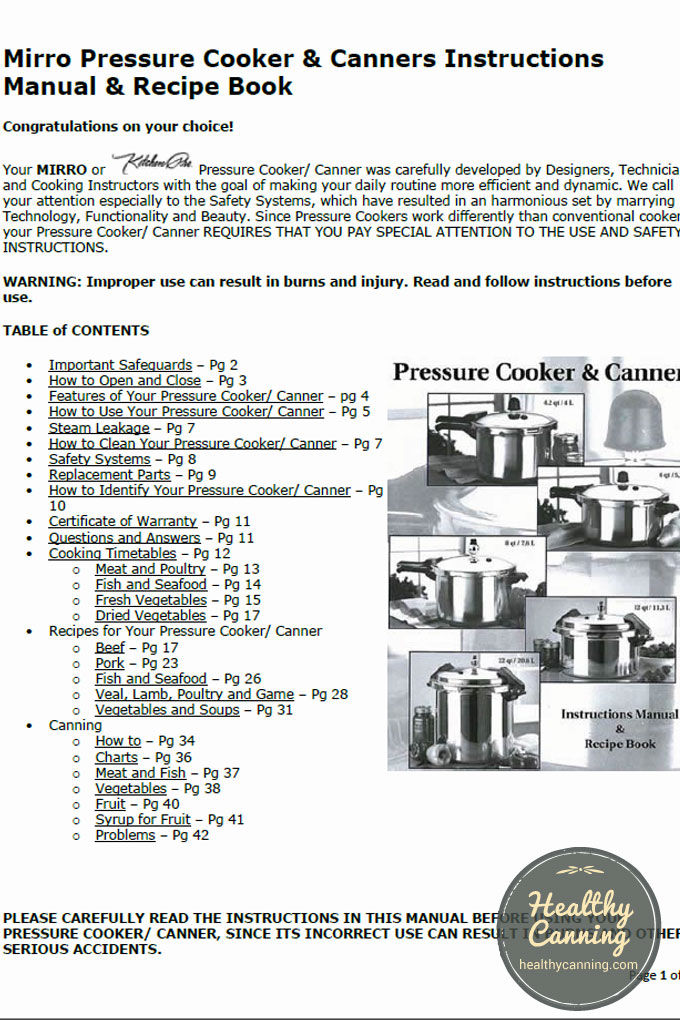 For those who already have a Mirro pressure canner, or who got a second-hand one, we provide the Mirro manuals below as a courtesy because people have a hard time finding the manual online.

If you have a newer one, say, purchased 2016 or 2017 onwards, disregard the older manuals entirely. See section below called “Operational Changes”.

Here is an overview of Mirro pressure canning equipment .

2004 Mirro Pressure Canner Manual Dated 2004 (in handwriting on the manual).

Undated Mirro Pressure Canner Manual This one is undated, with no part or version number assigned to it, either.

Our guess from the feel of the layout and design is that the undated one is the slightly more recent one; but that is a guess. Consequently we are taking the unusual step of providing links to both (normally our practice is to just provide the most recent manual for something to avoid confusion.)

Our providing links to the manual(s) is not an endorsement of either manual. They are dated.

As far as canner operation goes, it no longer reflects the current models being sold by Mirro. For older, legacy-model Mirro canners, you can refer to the manual for operation instructions.

But, do not use their food pressure canning recipes or directions, because some appear to be out of sync with those of the USDA and there’s no indication of who tested those recipes for safety. And note as well: Mirro is actually even physically long gone from its home in Wisconsin – their former site has literally been razed to the ground — so there’s probably no one left backing those canning suggestions. For actual canning recipes, follow the USDA Complete guide instead.

The old manuals (see above) say that the weights on Mirro pressure canners will gently rock or jiggle continuously while processing — as do the weights on Presto canners.

That does not, however, apply to how the new Mirro pressure canner models work. The weight now releases steam in a hiss every 15 to 20 seconds, instead of continuously rocking or jiggling.

It was the Master Food Preservers of Central Sierra (based out of the University of California Cooperative Extension) who discovered this in 2017 and brought it to the public attention.

There are other operational differences as well.

Consequently, given that the usage directions in the old manuals no longer apply, and the processing times and recipes are dodgy, the old manuals are pretty much of no use to you at all if you have a newer model Mirro.