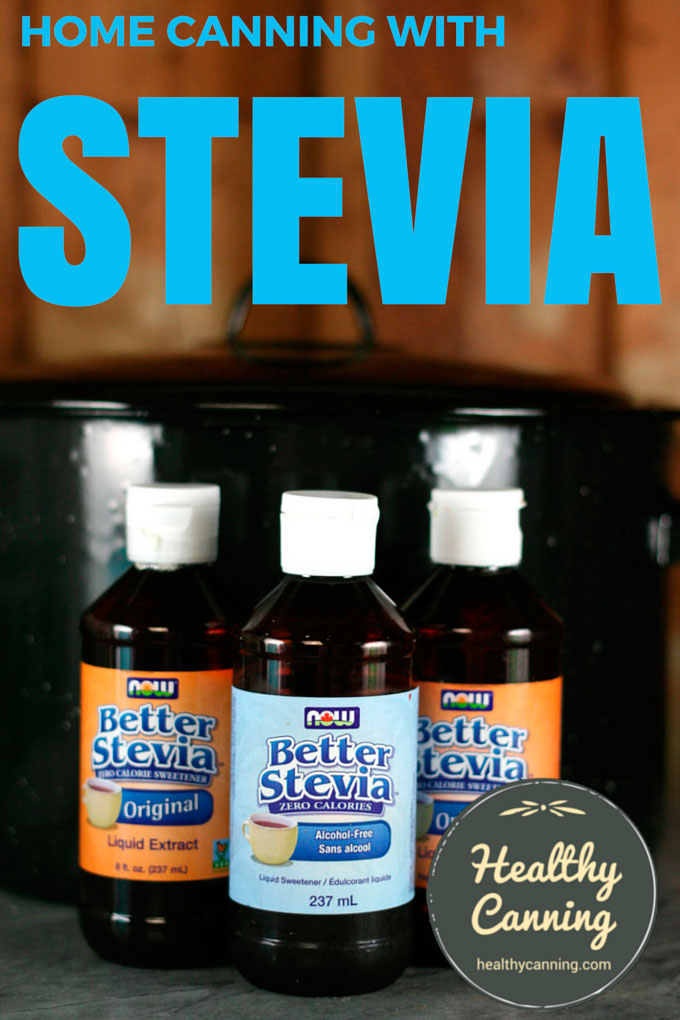 HealthyCanning.com works with liquid stevia as its default sweetener in home canning recipes that require a sweetener.

For those wishing to make the original full-sugar versions of the recipes on the site, every recipe provides that alternative as well.

Stevia is a natural sweetener from the leaves of a plant called “stevia.” Just as sugar is extracted from sugar beets or sugar cane, the sweetener stevia is extracted from the stevia leaves.  For in-depth information, you may wish to see the CooksInfo.com entry on stevia.

Raw stevia leaves have a bitter after taste to them, unless they are processed in a way to filter those bitter compounds out.

It many ways, liquid stevia is just like vanilla extract. It’s a highly-concentrated flavouring liquid that you want to use only in very small quantities, such as a teaspoon at a time, because a little goes a long way. And aside from flavour, it impacts a canning recipe in no more a way than adding a bit of vanilla extract would. You are not changing the density, or the pH.

Why have a sweetener at all in home canning?

Many home canning procedures of course don’t require a sweetener at all — such as meat and veg. And jars of fruit are more versatile when you go to use them if you can them unsweetened.

Some items, though, such as pickles, relishes and chutneys, rely on a very high degree of acidity for food safety. Without some sweetener to help mask and balance some of the acidity, most people would find those products so sour and harsh that they would be unpalatable.

Why stevia for home canning?

Stevia does not change taste or lose sweetness when heated.

Stevia is stable to heat and could be used for canning fruit and other products where sugar is not critical to food safety or texture.  Rebaudioside A, the active ingredient in Stevia, is 300 times sweeter than sugar. It has been listed as Generally Recognized as Safe (GRAS) by the Food and Drug Administration (FDA) and therefore is exempt from food additive regulations.”  [1] Penn State Extension. Sugars and Non-Nutritive Sweeteners in Food Preservation.   1 July 2012. Accesssed January 2015 at https://extension.psu.edu/food/preservation/news/2012/sugars-and-non-nutritive-sweeteners-in-food-preservation

The University of Kentucky Extension says,

You tried a form of stevia that didn’t filter out the bitter compounds.

See section below, “What’s the best brand to get.”

Why stevia in liquid form?

On HealthyCanning.com, we have used liquid stevia as our sweetener in canning recipes.

Stevia is pricier than sugar, to be sure. But a bottle of it goes a very, very long way. And, you can compare the price of it to what you would pay otherwise for special store-bought sugar-free or sugar-reduced preserves. You can store your stevia in the fridge for a good, long shelf life.

What is the best brand of liquid stevia to get?

In our view and to our tastes, the makers of Better Stevia have succeeded in removing any and all bitterness.

We’re not in a position to say what the best brand is. At the start of our research, we hit upon one brand right at the start that worked and met all criteria, and so have used that one (because the mission was to explore its use in canning, rather than to explore the stevia market.) [Edit, 2018: in the intervening years, we have heard from people who have tried brands other than the one we recommended, and they have found them bitter.]

That brand is called “Better Stevia.” In our view and to our tastes, the makers of Better Stevia have succeeded in removing any and all bitterness.

While you may still prefer the distinctive taste that real sugar adds to your coffee or tea, along with the sweetness, we’re hoping you will taste no difference in your preserving by using this brand of liquid stevia. 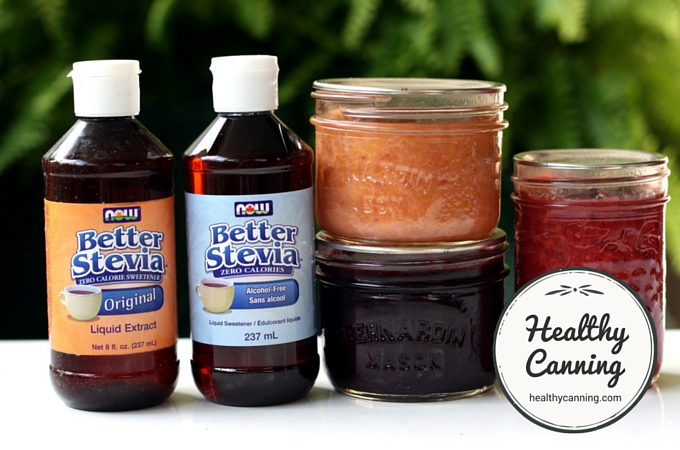 Your first instinct will be to taste it out directly out of the bottle and to mull over its taste. That is fine: but, no one in their right mind would eat white refined sugar in that way, just plain spoonfuls directly right out of the sugar bowl. In fact if you do that with white sugar, you might not find you like it that much. But, what’s important about a sweetener is how it tastes as ingredient in something else.

To start with, just try to the 2 oz (60 ml) size bottle. Just to make sure you like it. Then, you can upgrade to the larger bottles which work out much cheaper.

Make sure you get the original, regular, unflavoured kind. There are two versions of it: one that uses alcohol in the filtration process, and which is a bit thinner, and one which is alcohol free, which is a bit more syrupy. It makes no difference which version you get. Just don’t get the flavoured kinds (French Vanilla, English Taffy, Tropical Fruit, etc.) because they’d impact the flavour of the products you make. Nobody wants to sink their teeth into a French Vanilla Dill Pickle. 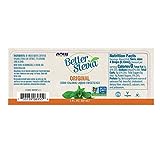 There may be other brands of liquid stevia that are as good as Better Stevia;  we’ll try other liquid brands some day.

Why didn’t you use honey as a sweetener in home canning?

Honey has to be used in relatively large quantities to substitute for sugar. For every 1 cup (225 g / 8 oz weight) of sugar, you can replace with 150 ml (5 oz) of honey. Given that the pH of honey is unreliable and can range from 3.4 to 6.1, that’s a lot of added liquid potentially pushing your product up into the unsafe zone above 4.6 pH.

Beyond the safety aspects, from a cook’s point of view, honey would change flavour distinctly, and cloud pickling liquids.

Honey is also a form of sugar and adds a great deal of calories to a recipe.

That being said, the taste of honey is wonderful, and the site will certainly be including some tested recipes that use honey as a sweetener.

If you would like to see more honey-based recipes for home canning, you may wish to consider contacting some of the reputable sources and asking them to develop more of such recipes.

What was the guideline used for replacing sugar with stevia in the canning recipes?

Stevia is incredibly sweet, so as a rule of thumb, when adapting a recipe for sugar-free, we start by using 1 teaspoon (5 ml) of stevia for every 225 g ( 1 cup / 8 oz) of sugar called for in a recipe. Because there are no “dissolving” issues with liquid stevia as there are with sugar, you can add stevia even at the very end of a recipe if a last minute taste leaves you feeling you want a bit more sweetness.

We should add one thing: first, a recipe was examined to make sure that it didn’t rely on sugar to provide safety through reduced water activity. There are a very, very small handful of recipes like that. Recipes such as Corn Cob Jelly and Maple Walnut Syrup are both water-bathed (or steam-canned) recipes missing anything acidic in them at all — there isn’t even a bottle of lemon juiced waved in their general vicinity — so they clearly rely on the presence of sugar molecules to provide safety by binding up all the water thus depriving the nasties of any water to do anything. These recipes must be left as is.

Is this stevia / sugar swapping endorsed by reputable canning sources?

The research of reputable sources is showing that stevia is fine in home canning. And, academically it’s acknowledged that sugar in the quantities used in home canning rarely plays a safety role (aside from the handful of reduced water activity recipes).

That being said, for legal liability reasons they can never and will never endorse any changes, of sweetener or any kind, to the recipes they published. And who can blame them — there’s no upside for them in doing so.

In fact, if you look at the front of the Ball / Bernardin Complete Guide (2015), they put a disclaimer about even using their recipes exactly as published: “All recipes are used at the risk of the consumer. We cannot be responsible for any hazards, loss, or damage that may occur as the result of any recipe use.”

So while HealthyCanning.com has striven in every other aspect of home canning to be plus catholique que le pape, this aspect of swapping sugar for stevia is enough to make the site a heretic site in the eyes of the Safe Canning Police.

Stevia is stable for heat greater than can be created in home canning. It is also pH and photo (light) stable, and it has good long-term shelf storage life. “Stevia extracts are extremely heat, photo and pH stable under a wide range of processing conditions and have exhibited excellent shelf stability.”  [3] Stevia Faq. International Stevia Council. Brussels, Belgium. Accessed March 2015 at https://www.internationalsteviacouncil.org/index.php?id=30

Only at 140 C (284 F) does the stevioside molecule start to noticeably degrade, and at 200 C (392 F) the molecule will completely decompose. But remember, this is referring to the internal temperature of the foods where the molecule is, not the ambient temperature of the water or steam around the food, or the air around the food in an oven.  [4] A. Esmat Abou-Arab*, A. Azza Abou-Arab and M. Ferial Abu-Salem. Physico-chemical assessment of natural sweeteners
steviosides produced from Stevia rebaudiana bertoni plant. African Journal of Food Science Vol. 4(5) pp. 269- 281, May 2010. Accessed March 2015 at https://www.academicjournals.org/article/article1380720967_Abou-Arab%20et%20al.pdf