×
You are here: Home / Ingredients for home canning / Flour and Corn Starch Use in Home Canning 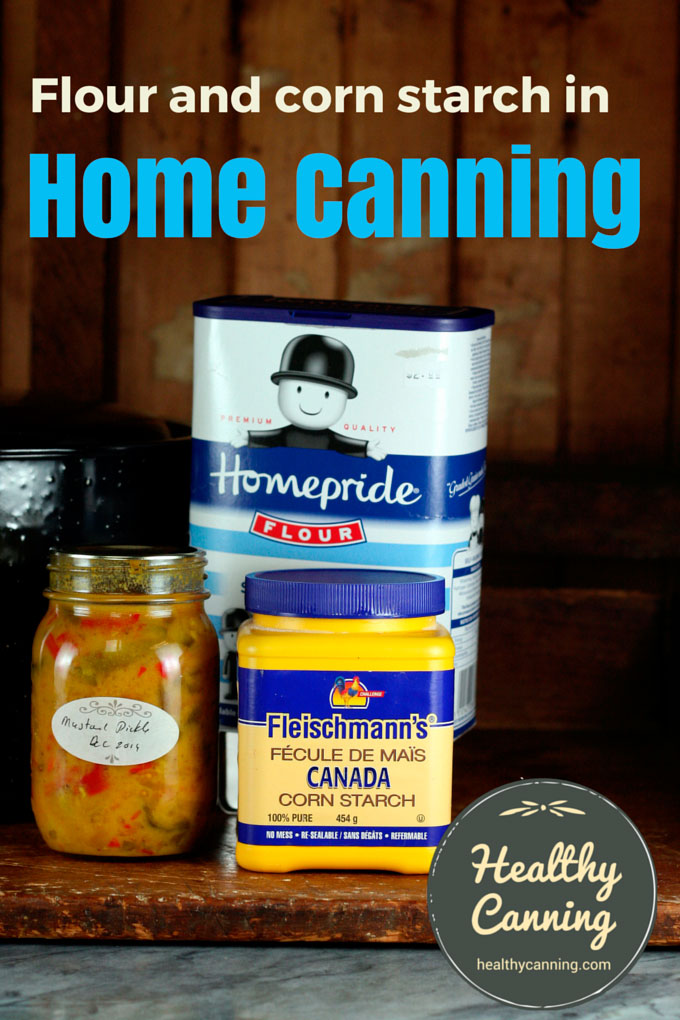 Flour and corn starch can be fightin’ words in canning circles and are generally taken to be a dividing line between safe and unsafe canners.

It’s fine to use flour and corn starch as thickener when modern, tested recipes from reputable sources call for it. These recipes have been lab-tested to ensure their safety. Don’t use old recipes of unknown origin that call for it, and don’t ever add it yourself willy-nilly to canning recipes.

The flour meant will be plain (or all-purpose) white wheat flour — as in, not whole-wheat flour or flour from any other type of grain. And do NOT use self-rising flour.

What is the danger of using flour and corn starch in home canning?

There’s a general caution about their broad use for two reasons:

Adding flour or other thickening agents to a product for home canning prevents the heat from penetrating to the center of the jar, interfering with safe processing to destroy the bacterial spores that cause botulism. Never add thickening agents to a home canned product. Wait until you are ready to prepare the food for serving and then add the flour, cornstarch, or other thickening agent you are using.”  [1] Making Soup Safely. Penn State Extension. 22 October 2012 blog posting. Accessed March 2015 at https://extension.psu.edu/food/preservation/news/2012/making-soup-safely

Even back in 1948, the Kerr Canning company was warning against flour in canning:

Should steak, chicken or other meats be rolled in flour for canning? No. Flour retards heat penetration, flakes off in bottom of jar and gives the meat or chicken a slightly warmed-over taste.”  [2] Answers to your canning questions. Kerr. Question 95, page 52. 1948. Accessed March 2015 at https://www.endtimesreport.com/5-Kerr_1948_Canning_Questions_and_Answers.pdf

The prohibition against thickener is enforced by anti-thickener vigilantes, who are a subset of the Safe Canning Police.

No tested soup recipes for home canning that we know of currently allow for addition of a flour or cornstarch ingredient.

That means no noodles, dumplings, pasta, matzoh balls, flour or Clearjel thickener, rice, grains, etc. Not even if they are whole grain, hand-harvested, organic, or are gluten or GMO or whatever free!

The exception is three “starchy” vegetables: potatoes, corn and peas. You will see those in some home-canned soup recipes.

Thicken your soup as desired upon opening. DIY SOS Mix makes for an amazing instant thickener.

Exceptions to the “no thickener” rule

Penn State Extension goes on to say, from the initial quote mentioned above, something very important which anti-thickener vigilantes try to sweep under a rug:

The only exception to this rule is when a scientifically research tested recipe calls for Clear Jel® as in pie fillings or small amounts of thickener in a few relish recipes. It is not safe to just add starch to any recipe or to create your own recipe.”  [4] Making Soup Safely. Penn State Extension. 22 October 2012 blog posting. Accessed March 2015 at https://extension.psu.edu/food/preservation/news/2012/making-soup-safely

So while reminding people that they can’t just add thickener to any old canning recipe, Penn State is acknowledging that the use of thickener is fine when a tested recipe calls for it.

Here are a list of tested recipes as of 2015 where flour and corn starch are used:

Pickled Corn Relish. USDA. They say you may use flour to thicken the relish. The quantity indicated (4 tablespoons) works out to be ⅔ teaspoon per cup. That’s pretty insignificant. And it’s easy to see why you might want to exercise the option and use it: the relish can be very soupy without it.  [5] United States Department of Agriculture (USDA). Complete guide to home canning. Agriculture information bulletin No. 539. 2015. Page 6-28. 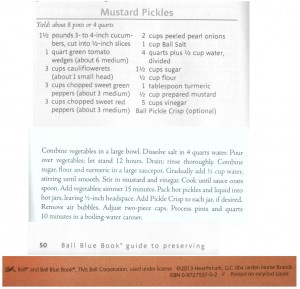 The Ball / Bernardin Complete Book (2015 edition) appears to be moving its recipes that called for flour and cornstarch to using Clearjel instead.

The Bernardin 2013 guide offers one recipe where you can use either flour or Clearjel. ( Homestyle Corn Relish page 76.)

The above recipes from Ball / Bernardin Complete, and Bernardin, can allow you to enjoy these thickened home canned products using recipes tested for Clearjel.

As always, though, just verify with your source of Clearjel. The makers of Clearjel certify that it’s free from gluten,  but it’s possible some cross-contamination with wheat flour gluten could occur in the hands of those who buy it in large quantities and repackage it into smaller packages for sale to home canners.

In the category of “a little knowledge is a dangerous thing”, the anti-thickener vigilantes unfortunately have interpreted the flour situation to be an absolute, universal ban on it. They even discount the recommendations of the reputable authorities who have actual certified lab expertise in this field.

The reason could be that the vigilantes only feel comfortable in a black and white world, where things are either allowed or not allowed, and their thinking was never fully developed enough to leave room for anything in between.

These vigilantes don’t want people even to know about the lab-tested recipes above where thickener is authorized. People have been kicked immediately out of canning groups just for mentioning them, as though the very titles of those recipes are part of some Index Librorum Prohibitorum in the Church.

Ignore the vigilantes on this topic.

To be clear, do not go adding thickeners of your own accord willy-nilly to canning recipes, and do not use old family canning recipes that might call for thickeners. But when a trusted, reputable authority does call for such a thickener in a modern canning recipe, use it with confidence — and exult in the rare occasion where you do get to use it!